The Forgotten Children of HIV and AIDS 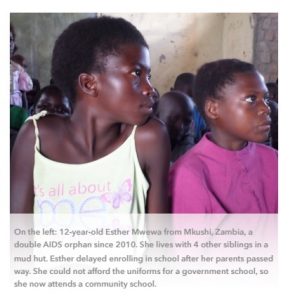 Children, naturally, are dependent on their parents, particularly in their early development. Parents are integral factors in the growth and support of their children. They teach them important life skills, push them to learn, and provide them with morals and values. Millions of children lack this support due to parental absence, perhaps caused by death or sometimes abandonment. Children in these situations often feel lost, confused, and vulnerable. Sub-Saharan Africa is home to the world’s largest orphan population. Zambia, specifically, a developing country in south-central Africa, has been struggling to deal with the growing population of orphans, especially children who have been orphaned by AIDS.

Following Uganda, Zambia has the highest proportion of children orphaned by AIDS. By the end of 1997, 9% of children under the age of 15 were orphaned by AIDS. Today, about 75,000 children are living on the streets of Zambia’s capital, Lusaka. Half of these children are orphans. 1 in every 4 households is headed by a child, acting as the primary caregiver to their siblings or fellow orphans. This makes is difficult for children to commit to their education; they become less motivated to attend school and look for alternative ways to survive. A Zambian study showed that 32% of orphans in urban areas were not enrolled in school, contrasting with 25% of non-orphaned children. In rural areas, these figures jumped to 68% of orphans not enrolled in school, and 48% of non-orphans. 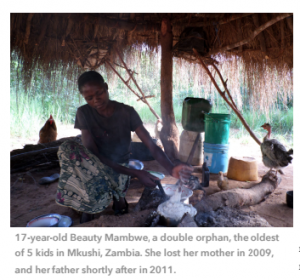 Children orphaned by AIDS may not receive the healthcare they need because they endure social exclusion; this is a common consequence of parental death by AIDS. Orphaned kids are at a greater risk than their peers of being infected with HIV because they are often emotionally vulnerable and financially needy, so they are more likely to be abused and harassed, and forced into exploitative situations as a means of survival. There are a lot of efforts being made to prevent orphans from sleeping on the streets or resorting to exploitative ways to support themselves. Unfortunately, the government has no national orphan policy. NGO’s and various religious institutions have tried to fill the gap of governmental responsibility. This effort has grown tremendously in recent years. Many organizations focus on strengthening families in order to ensure support for children who may be affected by a parent’s death by AIDS. Additionally, one of the most effective ways to help orphaned children is to train them with essential life skills. Despite the progress that communities and organizations have been making, it remains limited because of the lack of government involvement. Organizations need funding to address these issues at a national scale. If this issue is not tackled at a larger scale with the help of the government, progress will remain slow and this issue will remain prevalent. Humanity Africa is working with AIDS orphans in rural Zambia to support them to have a second chance at life through education and improved health provisions.

This article was written by Zeina Haidar – an undergraduate student at the University of California, Los Angeles. She is working as a volunteer at Humanity Africa as part of her study abroad program in London. Zeina is a Lebanese-American student, who grew up in the United Arab Emirates. She is studying Molecular Biology at UCLA and is passionate about medical innovation. She is also interested in writing, history, Game of Thrones,and trying to get a grip on adulthood.